LabVIEW 101 - The Basics of LabVIEW and Graphical Programming

​What is LabVIEW used for?

​LabVIEW is a system-design platform and development environment for a visual programming language from National Instruments. It is commonly used for data acquisition, instrument control, and industrial automation on a variety of platforms including Windows, MacOS and Linux. It is also used in academic and research labs for data acquisition and analysis, as well as in industry for test, measurement, and control systems.

Where is LabVIEW used?

LabVIEW is used in a wide variety of industries and applications, including: It is also used in many other fields like aerospace, automotive, energy and utilities, and more.

Is LabVIEW a real programming language?

​While LabVIEW may not be considered a traditional programming language like C, C++, or Python, it is a powerful tool for developing custom software applications, and it has features and capabilities that are similar to those of traditional programming languages. It has a large library of built-in functions and tools for data acquisition, instrument control, analysis, and visualization, as well as the ability to interface with other systems and software.

However, because of its graphical nature, it is often considered more accessible and user-friendly for engineers and scientists who are not necessarily trained as programmers. This makes LabVIEW a great tool for those who want to quickly and easily develop custom software for their specific needs and applications.

What makes LabVIEW different from other programming languages?

LabVIEW is different from other programming languages in several ways, including:

I have heard the term data flow in regards to LabVIEW. What does that mean?

​In LabVIEW, data flow refers to the way data is passed between different elements of a program, such as functions, controls, and indicators.

Data flow programming makes it easy to visualize the flow of data and the logic of the program, which can help to make the code more readable and easier to understand. Additionally, because data is processed as it flows through the program, it is possible to create highly parallel and concurrent applications, which can take advantage of multiple processors and cores.

It's worth noting that data flow programming is not exclusive to LabVIEW, but it's a key feature of the LabVIEW development environment, and it's one of the things that sets LabVIEW apart from other programming languages. 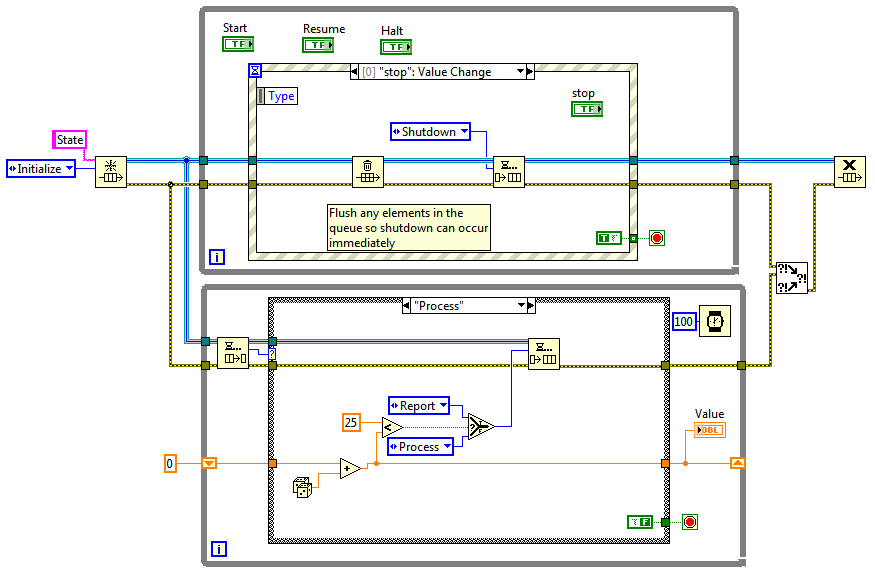 What is the performance of LabVIEW?

​The performance of LabVIEW depends on several factors, including the complexity of the program, the hardware it is running on, and the specific operations being performed.

In general, LabVIEW's performance is considered to be good for data acquisition and control applications. The graphical nature of the language allows for rapid development of programs, and the built-in functions and libraries provide a wide range of capabilities for data acquisition, instrument control, analysis, and visualization.

For simple data acquisition and control applications, LabVIEW's performance is generally considered to be very good. It can acquire and process large amounts of data in real-time, and can control instruments and other hardware with low latency.

For more complex applications, such as image processing, machine learning, or real-time control, the performance may be affected by the complexity of the algorithm and the amount of data being processed. In such cases, the performance can be improved by optimizing the algorithm or by using built-in libraries optimized for specific operations.

Additionally, LabVIEW supports multicore and multiprocessor systems which can greatly improve the performance of the system.

​What kinds of applications is LabVIEW used for?

LabVIEW is used to develop a wide variety of applications, including:

​What environments does LabVIEW support?

​LabVIEW is a cross-platform software development environment that supports a wide range of environments, including:
Additionally, LabVIEW supports a wide range of hardware architectures, including:
LabVIEW also supports the development of applications for embedded systems, such as those used in industrial control systems and Internet of Things (IoT) devices. Furthermore, it also supports remote control and monitoring of systems using web services, OPC UA and other protocols.

Can LabVIEW connect to databases?

Can LabVIEW connect to the internet?

What are the alternatives to LabVIEW?

There are several alternatives to LabVIEW that can be used for data acquisition, instrument control, machine control, and process control, including:

What are the advantages and disadvantages of LabVIEW?

In addition to the official support provided by National Instruments, there's also a large community of users and developers, who share knowledge and resources through online forums and user groups. This can make it easier to find help and resources when developing applications.

Overall, LabVIEW is well-supported by National Instruments and the community, however, as with any software, it's important to consider the specific requirements of the project and the support options that are most important for the use case.

How can I learn LabVIEW?

There are several ways to learn LabVIEW, including:
Keep in mind that learning a new software can take time and practice, so be patient and persistent. Start with the basics and gradually build your knowledge and skills as you go along.

How much is LabVIEW and where can I get it?

If I need help with LabVIEW, where can I reach out?

If you need help with LabVIEW, there are several companies and organizations that you can reach out to for assistance.